The New DK DropKick is NOW AVAILABLE – Go HERE to check it out and PRE ORDER yours today!

For this new updated DK DropKick version we decided not to change what our fans love about this board. Instead we upgraded the construction to make the board even better. The design of the DK DropKick has a lot of next level longboard deck features; Rockered Concave with Foot Flairs and mellow “W” in a drop-through design with useful sturdy kick tails. It has been out of stock for several months now while we tested some other laminating adhesives in this model.

Our goals were to:

1.) Improve the durability and increase the life of the board, but still weigh the same at just under 4 lbs.

2.) Not add composites to the board which are costly and are bad for the environment.

3.) Keep the price reasonable at $125 for this new DK DropKick deck.

After quite of bit of testing over time we landed on a resin we had used before in the older version of this board called the Carbon DropKick. It has some really nice properties that makes a better bonded all maple board versus one with just regular wood glue. This Special Resin is more Eco-Friendly than other resins and has some other killer properties we found work great with maple veneer lamination. When pressed it goes through the pours of the wood in a way that bonds the plies of maple together a lot better. The resin becomes part of the wood in and around it holding it all together in a superior way instead of just sitting between the plies like wood glue does.

The goal for the design we kept for this updated model DK DropKick was to make one board worthy for downhill, freeride, and long distance pushing while having two functional kick tails to use for urban transportation. It was originally released in late 2016 after our original models the DropKick and Carbon DropKick from 2006-2014. Those prior models both had single kick tails on a drop-through design. During the time those earlier models were in production, we had many requests from our fans for a double kick version. Thus we took almost two years to design the DK DropKick with an all new mold. We made the dimensions the size most riders would want at 39″ x 9.75″ with a 26.75″ wheelbase. This allowed for all these types of longboarding to be achieved effectively including stand-up slides at speed, downhill stability and grip, and easy and light enough to push for miles on end. And now over the almost three years it has been out, our fans have let us know how much they love this model and have learned all these types of longboarding on it. It’s a do it all design that many rely on as their everyday board to go out and shred whatever they feel like that day!

This special resin we are using for this new version has a flexible strength to it allowing it to dampen the ride, much like wood glue does. Most resins others use are chosen for use with fiberglass and carbon and end up being too brittle which makes the ride rougher. The contours of the DK DropKick with the particular dimensions and shape of the concave features like rocker, W, and the kick tail angles are actually what make the board so strong and durable. Basically the design prevents the kick tails from breaking on this drop-through design. However with so much going on in terms of radial bends in the mold, we did have too many boards warping after they had cured. This was mainly due to the traditional non-toxic wood glue we were using. It added a lot of moisture to the wood and sometimes would not allow the deck to cure properly. Since this was a problem we stopped production for a while until now. And by now making this same board with this special resin we eliminated waste with defective boards. And didn’t have to use fiberglass or carbon to secure the board and eliminate warping.

The Special Resin locks down every board we make with it, never allowing it to change shape over time no matter what environmental conditions it’s in. How we know this is because of extensive testing making many new samples with this new resin. We did all kinds of testing over time to ensure every board never warped. One of the main tests was throwing it in a super hot attic right after it came out of the press. And leaving it there for over two weeks. Any other board out there made with maple and wood glue would definitely warp and crack if thrown up there before it cured outside the press in a stable environment like it’s supposed to. The new DK DropKick decks we tried this with did not, which proved to us they will stay true their whole life no matter where they are in the world. We kinda already new this about this special resin because for each and every Carbon DropKick we made we also used this resin. And they never had any warping issues during it’s long production life of over six years.

We wanted to keep the same sweet design of the DK DropKick but now make it way more durable with no chance of defects. We could of made it overkill with carbon but like said it doesn’t need it like the Carbon DropKick needed it to prevent the kick tails from breaking. The DK DropKick design, even with the old wood glue, never allowed the kick tails to break. Also we wanted to keep the price reasonable at the new price of $124.99 for the resin deck versus $109.99 for the old wood glue deck. If we added carbon too, it would have to be closer to $200 for this deck. In our opinion adding composites really isn’t the best way to make a deck because you can still achieve strength and durability without adding those expensive materials. Plus those materials do not decompose well which is not good for the environment.

We here at Eastside enjoy letting you know the process of how our boards are made and what thoughts and ideas go into them. We know not everyone will read this or care that much about that but some do and for those who read this, thanks for hearing us out! We assume you are probable a fan who has supported us one way other another over the years. So we thank you for trusting us and our products, and hopefully they serve you well for what ever joys of longboarding gives you!

The New DK DropKick is NOW AVAILABLE – Go HERE to check it out and PRE ORDER yours today!

If you’re looking for a do it all board that will last a very long time, then we encourage you to give this one a try. Everyone we know who steps on it instantly loves how comfortable the concave is. It’s deeper than most other drop-through boards yet not too aggressive. It locks your feet in completely at speed but still easy and comfortable to push. Many become total fans of this well thought out concave after they try a slide on it, bomb a hill on it, or push around town on it. And for those who love to use a kick-tail and even ollie, they also enjoy the DK DropKick for that. Those riders love being able to jib around on it, drop off curbs, get over cracks, and use the kick tails to get creative with their slides by having their foot on it while sliding. Plus everyone loves to just plain old be able to kick their board up to their hand after they step off. You don’t have to bend over and pick up your board, and it looks cool! 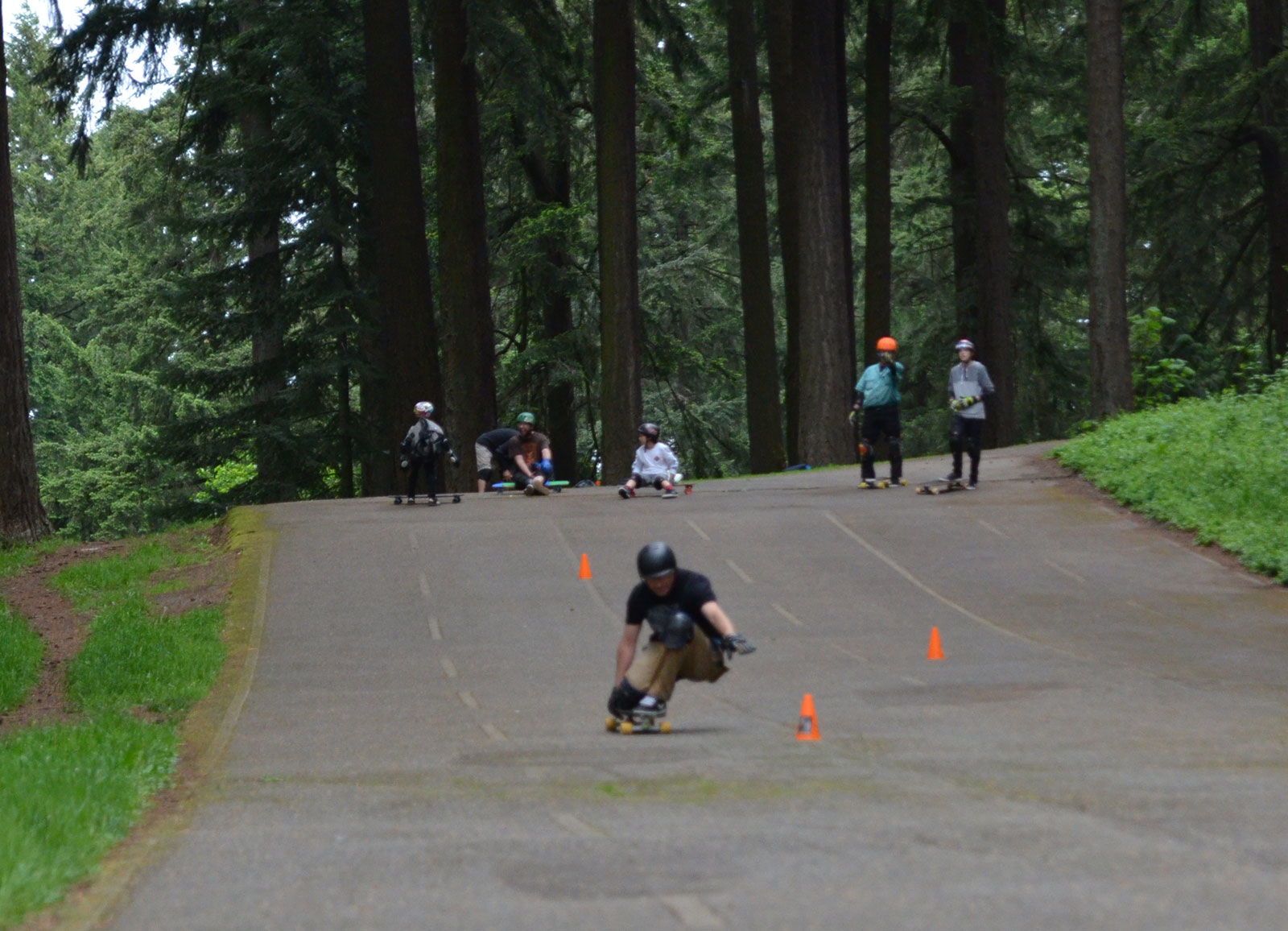 The first Longboarding 101 for this year opens for Registration on March 6th!

Based on the Eastside of Portland, Oregon. Owned and operated by local longboard instructor Robin McGuirk.